skip to main | skip to sidebar

A lot has happened in the C++ lands recently. Our old map has become outdated. During the New Year holidays me and my friend Jim added some new stuff to the map. Well, he is the artist, so he actually added everything. We have a New Standard War now, old territories are significantly improved. 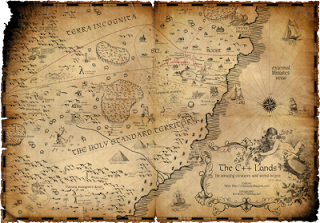 JPEG version, which is smaller

People were very creative and found some interesting ways to use the previous version of the map besides "print it and put on a wall". A German university uses it to teach students C++. The map was used on conferences. A small Russian store selling knifes used it in an advertisement.
We don't mind, you can do whatever you want with it. But remember that some of the elements of the map were taken by Jim from internets and we don't own copyrights on them.

P.S. sources will be published soon

The only thing that looks a bit strange to me is "final" and "override" being on C++98 territory?

The only thing that looks a bit strange to me is "final" and "override" being on C++98 territory?

They've trespassed the border to be closer to the inheritance lands. :-)

Amazing map. I'm rather missing the vast armies of RAII marching in to bring the decisive strike against the forces that besiege the castle of dynamic memory ;-)

This map is awesome, with a lot of love for details.
I'll use it venturing farther up North :-)

Thank you for sharing this map! How 'friend' was represented had me smiling. I think this map does a great job of showing the landscape of C++. :)

Hi. My name is John Spicer. I am with Edison Design Group. We develop a C++ front end used by many companies (see www.edg.com). We are active members of the WG21 C++ standards committee.

I love the map. As a compiler developer, I feel that we were left off of the map. In some compilers there are the peaks of standard conformance and others the valleys of proprietary vendor extensions.

I also think the shipwreck of concepts is not right. This can only be fully appreciated if you didn't live through the great export wars. Dropping concepts was like stopping construction on the tower of babble, it was a shame we didn't get what we were hoping for, but we (metaphorically) saved millions of lives in the process.

Where is the Bjarne Stroustrup & Grady Booch????